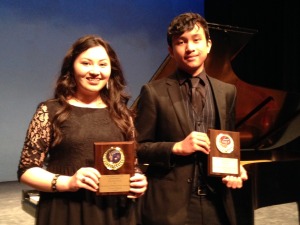 The Junior Philharmonic Society of New Orleans recognized outstanding young artists who performed in the 2014 concert series and were found to be deserving of special cash awards. Pictured are Christina Hera, who received the Platzer Award for artistic excellence in music, and Ben Mader, who received the Irving Carr Award which is given on the basis of potential.

The organization also recognized two other students who were not able to attend the award presentation – Kristiana Bell, who received the John Tobin Award for outstanding performance, and Sarah Weinberg, who received the Scholarship Award to encourage continued studies in the performing arts.